Yesterday, I somehow arrived at Firecracker and ended up reading its design documents. Firecracker is a project by AWS which helps in creation + management of MicroVMS. This is of great interest to me, as I always wondered how AWS Lambda works and I have been interested in secure execution of code on servers for a long long time.

Firecracker’s docs describe that it uses KVM (Kernel-based Virtual Machine) behind the scenes to operate. hmm, KVM huh? I have heard of it before as an alternative to QEMU, Virtual Box etc. Well, is it really the alternative? hmm not sure. Well then what exactly is it?

I consider this to be a good start of learning about various virtualization technologies and probably this will give me good idea about things like, “what is KVM?”, “what are Containers?” etc.

So, here we go! A series of Wikipedia pages to read now :D

(oh I forgot, I haven’t used Firecracker or KVM practically yet. So I will see if I could give them a try during this time.)

Kernel-based Virtual Machine (KVM) is a virtualization module in the Linux kernel that allows the kernel to function as a hypervisor.

After googling a bit, I arrived at this awesome link which teaches about kernel modules.

Basically it is where action is! You can add functionality to the kernel by loading modules to it instead of writing down all the code in the main kernel code. Having this modular approach avoids ending up with a monolithic kernel which has bigger size and complexity.

Ok, let us see what kernel modules are running in my pi. (lsmod is our friend)

I could see .ko extension files is the artifact that is needed to load a module. So, if you are writing a kernel module you would end up building a .ko (kernel object) file. To load this, use the insmod command.

I played around a while to see all the available kernel objects that came with my installation and here is what I found.

The above directories are used to categorize the kernel modules and fs is a category, which I suppose is responsible for file systems.

Yeah! I could see some well know file system names. Does that mean a file system is just a kernel module and to write a file system, all I need to do is write down code and generate a .ko file and load it? (Strong guess from me is YES, but I will only know for sure if I attempt writing one or is someone who have attempted could tell me – let me know if you know the answer for this!)

I have heard of this word “hyper” in the Windows world like “Turn on Hyper-V”. Well I turned it on, but without knowing what exactly it is. Now I have the answer. Hyper-V is the a hypervisor built into Windows (just like how KVM is for linux)

While reading about KVM, I came across a concept named Paravirtualization. Here is the Wikipedia verses,

I first encountered libvirt while checking out Digital Ocean’s libvirt Go package. libvirt is an open-source API written in C (with bindings in other languages) to manage virtualization. Hypervisors will be using this library to actually create and manage virtual machines.

I think I kind of went through some basic reading materials. Now I am going to try to create a virtual machine using the kvm interface.

I am on a raspberry pi and my lsmod already revealed that I don’t have kvm kernel module loaded. KVM’s support as per the official page is for CPUs running on Intel or AMD. So, I going to spin up a virtual machine in Digital Ocean to play around.

Doing an lsmod in my DO (Digital Ocean) box revealed that my kvm.ko and kvm_intel.ko are loaded.

libvirtd seems to be an important component, because it is the daemon that exposes a socket for accessing libvirt API to manage VMs

Currently no VMs are present as per virsh.

Let us try creating one!

After some strong belief on virsh and virt-install tools, I just successfully created a VM running alpinelinux3.8 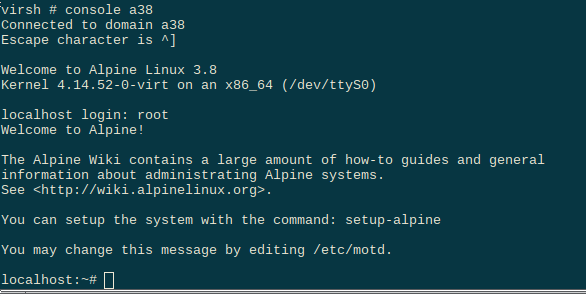 I used virt-install to create the VM

To manage this VM,

Before closing, I would like to check one more thing, “Where does the kvm kernel object sit?”

I also noticed this thing called irqbypass.ko which is being used by kvm.ko …