I used ansible at work few months back. Today, I faced a problem at work, trying to connect to a virtual machine on Google Cloud Platform created with ansible. I didn’t feel surprised, when I was not able to be productive on it immediately, because I didn’t learn ansible as much as I learnt terraform. I learnt both of them using the docs. If you ask me to do something dealing with multiple machines, I would probably prefer terraform over ansible. Reason for this would be

lol. I was just writing a blog post and I got hit by this. 🎯

Thanks for bringing it to notice. 👀

BTW, I love @HashiCorp and all the stuff you guys do. 📰

Still thinking how I didn't notice this all these days 🤔

But, ansible is a great tool (based on my first encounter with it and the amount of stuff they are doing) and I don’t want to be missed out in the party. I really would like to figure out when to use ansible and when not to. The documentation probably has lot of things and is kind of scary for me. I had gone over a lot of things in there already few months back and I remember almost nothing. So, this time I am taking a different route - I just signed up for Linkedin Learning (Lynda) and started watching Learning ansible course. Proabably this could help me remember core concepts of ansible.

Python is a prerequisite and since I am trying this out on macOS, I am supposed to have pip installed for installing ansible.

This probably seems to be the super cool thing about Ansible. “There is no need for running agents on remote machines to manage them.”

So if there is no agent installed on the machine, how does the machine receive the tasks to be executed?
It seems like ansible’s default communication is via SSH. 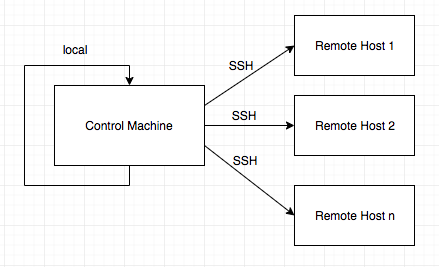 Ansible does not result in a state file like terraform. This means the same ansible script could be run from any machine and it will understand the state of things in the runtime.

Let me do a small experiment for this. I will try to bring up a GCP machine with ansible by using one fresh machine as control node and use the same YAML in another new control node. I did this experiment by running a runSh on Shippable with two different nodes.

wow! Ansible understands the state correctly and results in creating the node only once eventhough I ran it twice on the provisioning scripts twice from two different control nodes.

How does ansible perform this magic?
I discovered this at a later point of time. It is by using “dynamic inventories”. (will discuss about it down below)

Inventory is collection of hosts (IP Addresses/Host names). Sometimes they are grouped together into named groups. (example: webservers, dbservers etc.)

Multiple inventories are supported. I am probably thinking we can define as much inventory files as we like and choose one when we run ansible.

Inventory could also variables. These variables could be used while executing a task in ansible and for controlling the behaviour of ansible (Eg: ansible_user=test). Variables could be grouped inside the inventory/group_vars folder.

It seems like there are two types of inventory sources.

This is exciting. I didn’t know about dynamic inventory sources before. I am going to spend sometime reading about it here.

So, the reason why my GCE instance did not get provisioned is earlier is due to this reason. I was using a dynamic inventory which contacted the google cloud platform for the existing infrastructure and updated in my machine.

I learnt how to use a dynamic inventories by looking at a sample that we wrote at work.

Various strategies for executing on multiple machines are present like Linear (Default), Serial, Free. Do check them out as they are interesting and could give you control over how ansible runs commands on your target machines.

ansible-doc utility installs with ansible. It is useful for getting help and reading about ansible modules.

This is the part I have been waiting for. Here is my conclusion.

Use terraform, if provisioning is the only need.

Use Ansible, if you are trying to manage already provisioned nodes.

When you want to provision + manage, go with any/both of them depending on your workflow.

So it is never Terraform vs Ansible, it is Terraform + Ansible. They could really agument each other and to attain this at an organisation level products like Shippable could help.

I guess there are lot more to explore and learn from. I will probably hint some topics for future exploration.